Announcing our close of $350M in new investment funds! 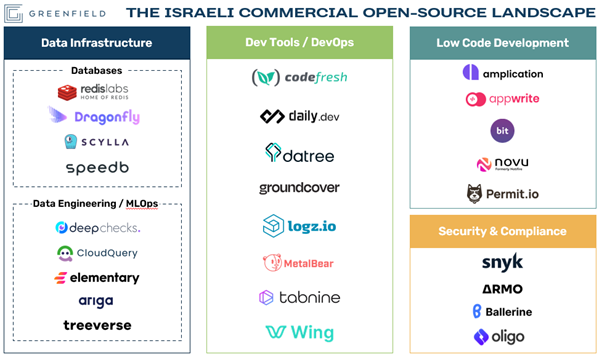 The Emergence of Israeli Open source

The Emergence of Israeli Open Source

While open source software has been around for decades, recent years have ushered in a new era of Commercial Open Source (COSS) companies - businesses generating billions of dollars in revenue on top of an open source core. This success has not gone unnoticed in Startup Nation, where a new wave of Israeli open source companies is taking shape.

The Roots of COSS

The concept of open source software can be traced back to the early days of computing when software was often shared and distributed freely among users. This was the case with many early operating systems and other software programs, which were often developed and maintained by a community of users who shared and improved upon the code.

Since then, open source software has evolved to become an important part of the technology landscape. Today, many of the most widely used and influential software programs, including Linux, Kubernetes, Spark, and many others, are open source. This dramatic growth can be seen through the lens of Github, which serves as a central repository for open source projects, which grew from just 3 million users to over 94 million over the past decade.

In recent years, we have seen a significant rise in the number of companies that are successfully commercializing open source software, most notably: Hashicorp, Databricks, Confluent, Elastic, and MongoDB to name a few.

The Benefits and Hazards of Building on Open Source

As more and more organizations become open to adopting open source due to standardization and cost benefits, the potential for commercializing it becomes more attractive.

When community-building is done right, founding a company rooted in open source presents many benefits over closed-source peers. By leveraging a global community of individuals working in tandem, companies can shorten development cycles, receive early validation and continual feedback about what they’re building, create an efficient bottom-up go-to-market motion, and even target potential hires from the community.

The monetization models of COSS have also transformed greatly in recent years. While Red Hat, which is often cited as the pioneer of commercial open source, predominantly generated revenues by offering professional services on top of its open source offering, two new models have emerged in recent years – open-core, and hosting.

With open-core, companies keep the vast majority of their functionality fully open source, while providing a suite of enterprise-grade tools on top, such as single sign-on (SSO), access control (RBAC), support for complex computing environments, and equally important – support and SLAs; which are all critical needs for large enterprises looking to implement these solutions. With hosting, commercial open source companies abstract the burden around self-management, enabling faster deployment and less maintenance.

While presenting many benefits, building a commercial business on top of open source does not come without risk. The permissive licensing of open source has led to several instances in which “big cloud” players have created their own managed services around these open source projects. Most notable of these are Redis, Elastic, and MongoDB which saw AWS offering a competing service and responded by making licensing changes to their respective open source projects (not without receiving a wave of criticism for these moves from their communities).

Overall, the rise in COSS is a trend that is likely to continue in the coming years. With Israel’s history of innovation in enterprise software, and in particular IT infrastructure and cybersecurity, it is not surprising to find the global emergence of commercial open source prevalent in the country as well. With two multi-billion-dollar companies, Elastic and Redis Labs, having already been built by Israeli founders, a new and exciting cohort of early-stage companies is now rising across a diverse set of sectors.

We expect the following trends will play a key role in the next-generation of Israeli open source startups:

• The Evolving Modern Data Stack – vast areas of the Modern Data Stack today are firmly rooted in COSS. DBT, Airflow, Kafka, and Spark, are merely some of the household open source names known to every data practitioner, and each sports a multi-billion-dollar commercial company behind it. As new areas within the stack continue to take shape such as data observability, governance, privacy, security, MLOps and others, and buyers look for open source standards to build on, we expect to see Israeli COSS contenders emerge.

In summary, while the world of COSS has made great strides in recent years, we believe it is still in early innings – both globally and in Israel. To be clear, closed-source software is not going anywhere, and in many cases is the right approach for most companies, but for those building for an audience of developers open source holds many attractive benefits and should be considered by founders.

If you’re building in the space, please don’t hesitate to reach out to the Greenfield Team.